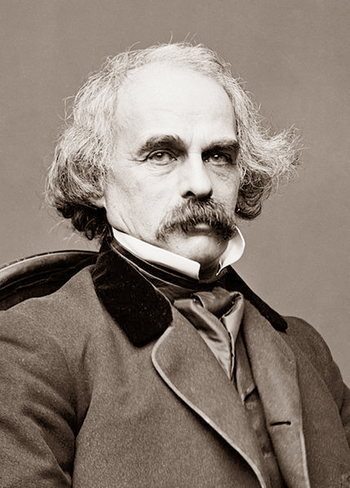 Nathaniel Hawthorne (July 4, 1804 – May 19, 1864) was a noted American dark romantic writer most noted as the author of The House of the Seven Gables and The Scarlet Letter. Hawthorne's great-great grandfather was John Hathorne, the only judge involved in the Salem witch trials who never repented of his actions, and Nathaniel is said to have added the W to his name to disassociate himself from his notorious ancestors. Hawthorne was a contemporary of and acquainted with most of the other noted authors of the silver age of American letters, most notably Ralph Waldo Emerson, Henry Wadsworth Longfellow, Henry David Thoreau, and Herman Melville, who dedicated Moby-Dick to Hawthorne. In addition to his famous novels, Hawthorne was also noted for his short stories collected in Twice Told Tales and Mosses from an old Manse, and he also wrote one rather sanitized biography of Bowdoin College classmate and close personal friend U.S Senator Franklin Pierce, who later became the 14th president of the United States. In between stints of writing, Hawthorne worked as a civil servant, starting as a "weigher and gauger" at the Boston Custom house and eventually spending four years as the U.S. Consul in Liverpool, England. Hawthorne's initial fame as a writer centered on his originality, nowadays he's most noted for their dark psychological intensity.

Hawthorne has also left an inadvertent mark on architectural history, as his Salem Massachusetts birthplace, his childhood home in Raymond, Maine, and the Old Manse in Concord (which was also occupied by Ralph Waldo Emerson) have all been preserved in his honor, along with the famous House of the Seven Gables.