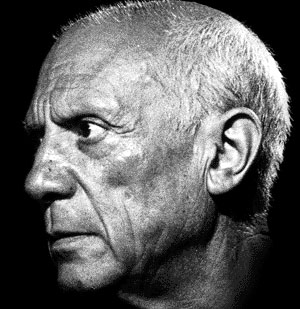 Pablo Picasso (born Pablo Diego José Francisco de Paula Juan Nepomuceno María de los Remedios Cipriano de la Santísima Trinidad Ruiz y Picasso, 25 October 1881 – 8 April 1973) is considered to be the most famous, influential and important painter of the 20th century. Best known for his cubist style, he was a prolific and versatile artist who worked in - and helped to pioneer - many different styles and was both a painter and a sculptor.

He was the subject of two documentaries, Visit to Picasso (1949) and The Mystery of Picasso (1956), in which he famously paints directly on to the camera.

His life has been made into two noteworthy films, the Swedish mockumentary The Adventures of Picasso (1978) and Surviving Picasso (1996) with Anthony Hopkins. He is also the subject of the second season of the National Geographic anthology series Genius, where he's played by Antonio Banderas.

Works made by Picasso with their own TV Tropes pages include:

References to Picasso in popular culture