Series / The Joy of Painting 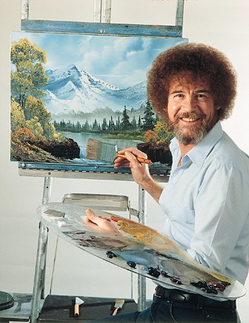 Let's paint some happy little trees.
"I'd like to wish you happy painting, and God bless, my friends."

The Joy of Painting is a half-hour art instruction show that originally ran from 1983 to 1994 on PBS. Hosted by Bob Ross, noted for his legendarily cheery manner and soft, friendly voice, the show aimed to teach people painting techniques in the amount of time given. Ross worked in oil paints and taught a method called "wet-on-wet painting", where the canvas would be coated with a wet base paint which other colors were laid over, allowing for a variety of blending techniques. The show was very minimalist, using only a black background and two camera positions. Due to his time spent being stationed in Alaska in the Air Force, all of Ross' paintings were nature landscapes, mostly forests or mountain valleys, but he'd also have "crazy days" where he'd do campfires, seascapes or other more atypical landscapes.

The show ended on May 17, 1994, due to Ross being diagnosed with cancer. His illness did not become known to the wider public until he passed away from it on July 4, 1995.

Despite ending many years ago, the show has an official Twitch account

that occasionally has repeated showings or marathons of the show, as well as an official YouTube channel

. However, the Twitch account has began inviting Certified Ross Instructorsnote Individuals who had completed a workshop course that has been certified by Bob to teach his painting style to livestream painting on camera as well; these livestreams are often broadcast on early Friday evenings prior to repeats of The Joy of Painting.

Parodies of his show are so popular that they have spawned their own trope, Bob Ross Rib.

Let's start out and have 'em run all the tropes along the page that you need to paint along with me.:

Aaand we'll finish off our trope page with... a happy little joke. And that'll just be our little secret.
Feedback