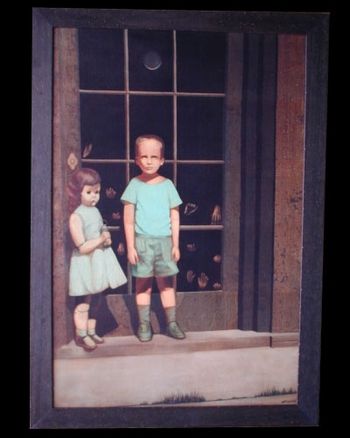 I knew I should have gone with the dogs playing poker. note "The Hands Resist Him"

Paintings, before the advent of the humble photograph, were the best thing to hang on your wall to provide a little culture, beauty and we swear that one just moved!

This is where a painting isn't normal. Maybe it's trapping something, maybe it's developed a life of its own, maybe it's a gateway to another dimension, maybe it's the source of power for an evil wizard, maybe it's just a cursed heirloom that brings misfortune... Or maybe it's actually the covering for a window with the "eyes" being the guy looking through it.

The Genre Blind, upon hearing of this menace, may try to come up with an excuse that renders it harmless, or otherwise just brush it off.