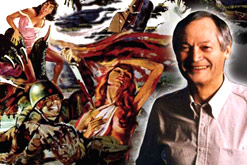 "To be like the Cor-Man, to live like the Cor-Man."
"Well, that's it, we're doomed."
— Crow T. Robot, on seeing Roger Corman's name come up in the credits, Mystery Science Theater 3000: The Undead
Advertisement:

Roger William Corman (born April 5, 1926) is an American movie producer and director sometimes known as "King of the B-Movie". He has directed over 50 movies and produced over 300, every single one of them having been created on time and under budget. Most of them are low-brow shameless exploitation films of various types that have become "classic" examples of So Bad, It's Good and are as far from True Art as it is possible to get; one film, A Bucket of Blood, was considered a masterpiece of sorts, and semi-autobiographical.

Corman did have his shining moment of artistic legitimacy when he directed a series of Gothic horrors based on the works of Edgar Allan Poe. These eight films — all released between 1960 and 1964, and all but one starring Vincent Price — are noticeably uneven, but the standouts really stand out. These include The Pit and the Pendulum and House of Usher, featuring legendary performances from Price, and The Haunted Palace, which was the first screen adaptation of an H. P. Lovecraft story (The Case of Charles Dexter Ward), dolled up for the Poe series. Also directed The Little Shop of Horrors in 1960; it was filmed in exactly two days, a world record. Corman made one film, The St. Valentine's Day Massacre (1967), for a major studio (20th Century Fox) with a decent budget, but disliked the experience and resumed low budget films.

By the mid-'70s, he operated his own studios, New World Pictures, which allowed him to take a dip in the world of hoity-toity art films. He started as the American distributor of Ingmar Bergman's Cries and Whispers, a rare example of a foreign film that got a Best Picture nomination. Other films by international directors distributed by Corman in the United States included The Tin Drum, Akira Kurosawa's Dersu Uzala, Bergman's Autumn Sonata, Federico Fellini's Amarcord, Alain Resnais's Mon oncle d'Amérique, and François Truffaut's Small Change and The Story of Adele H. He left in 1981 and formed a company called New Concorde. note As for New World, they would expand into other areas as the 80s progressed, owning Marvel Comics for a time; by 1990, it had left the film business and instead began to concentrate on TV, though many of its' shows were sold to Sony Pictures, which used them to re-activate the TV unit of TriStar Pictures. By 1994 New World had purchased TV stations in major markets such Atlanta and Milwaukee, which led the group to become involved with the fledgling Fox network as the NFC football Fox had just acquired made said stations attractive to Fox; the subsequent affiliation changes led to a Disaster Dominoes across the local TV landscape, and ultimately New World was purchased by Fox in 1997. The assets of New World have been dispersed amongst New Horizons (all Corman-era films), Disney (Marvel Comics/Marvel Productions, New World/Genesis backlog {including shows not owned by Sony}, Four Star Television backlog, Learning Corporation of America/Highgate Pictures backlog and Gold Key Entertainment backlog), Fox Corp. (TV stations and holding companies; others belong to Nexstar), Sony (1990-1991 TV shows) and Lakeshore Entertainment (pre-1990 post-Corman film library).

In addition to his knack for the financial aspects of moviemaking, Roger Corman also has a keen eye for talent. Many famous directors, including Francis Ford Coppola, James Cameron, Ron Howard, Joe Dante, and Martin Scorsese, started out directing films that Roger Corman produced. A number of actors — notably Jack Nicholson and Robert Vaughn — also had their start under Corman. And despite his sexploitation films, many women such as Gale Anne Hurd also had their start in the industry thanks to him. Corman realised women would work harder for less money as long as they had the opportunity to use their talents, often denied thanks to the rampant sexism of mainstream Hollywood. In recognition of this, Corman received the Academy Honorary Award in 2009.

Please note that, although he's known as "King of the B-Movies", Corman hates the title. As he insists, he made A-Movies on B-Movie budgets. Oh, and don't bring up Mystery Science Theater 3000 in his presence. Just don't! At the Jorgenson Guest Filmmaker Lecture, he took a swipe toward MST3K, saying that you could make money off making fun of something you don't make.