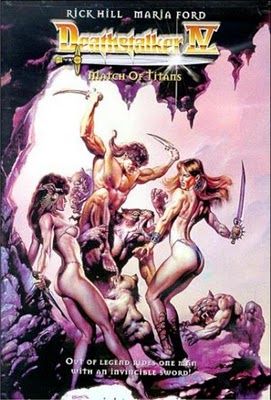 The fourth and final film in the Deathstalker Series. It is probably the least well known of the quadrilogy and is also the least memorable — likely because of the large amount of Stock Footage used in the making of this movie. The vast majority of the Stock Footage came from the earlier Deathstalker movies, with other bits and pieces coming from other Roger Corman produced fantasy films.

We open with Deathstalker (once again played by Rick Hill) looking for an old friend who borrowed his magic sword and then disappeared. He quickly joins forces with the maiden (and secretly, the lost princess of the realm) Dionara who - after the death of her warrior sister at the hands of the local beast men- decides to take her place in a tournament being held by the castle of Evil Sorceress Queen Kana.

Once at the castle, Deathstalker gets the feeling that something isn't right and begins sneaking around the palace at night to investigate. He and Dionara enlist the aid of the monk-like Vaniat, run afoul of the Psycho Lesbian Janeris and her Amazon Brigade and eventually uncover Kana's plot to turn all of the participants in the tournament into living stone golems under her control.