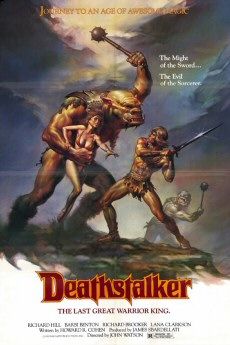 Financed by famed low-budget director/producer Roger Corman in response to the popularity of the live-action Conan the Barbarian movie, Deathstalker would inspire three sequels and become the most famous (or is that infamous?) of the many low-budget Conan-ripoff Heroic Fantasy films that were made during The '80s.

The titular Deathstalker (in this film at least) is a typical Barbarian Hero, minus the Hero. In the opening of the film, we see him rescuing a bandit beset by beastmen... only to kill the bandit himself before trying to have his way with the bound Damsel in Distress the bandit was raping a moment earlier. Our hero, ladies and gentlemen!

After initially refusing the pleas of the deposed king to slay his former Evil Chancellor, the Evil Sorcerer Munkar, and rescue his daughter (who is now a prisoner in Munkar's harem), Deathstalker decides to get involved after being told of the Three Powers Of Creation - magical artifacts that will give the one who holds all three together ultimate power - and that Munkar currently has two of the Powers; the Amulet of Life and the Chalice of Magic.

After retrieving the Sword of Justice and freeing the cursed guardian Salmaron (who decides to tag along with him), Deathstalker joins forces with two other warriors - Oghris (Our Lancer and Loveable Rogue) and Kaira (an Amazon in half a Fur Bikini), who are on their way to a tournament that Munkar is holding. The prize for the winner, after a series of deathmatches is to become heir to Munkar's empire. Deathstalker must contend with treachery on all sides as he fights to stay alive in the tournament and tries to locate the last two of The Three Powers.

This movie is probably the most violent and sexual of the Deathstalker Series. In fact, many fans of Robert E. Howard have noted that this film is closer in tone and content to the original Conan the Barbarian stories than the Conan the Barbarian movie was. Similar comparisons have also been made about this movie and John Norman's Gor books, particularly by fans of the later who are displeased that the Gor movies are surprisingly sex free. There is, however, NO relation to the Deathstalker novel series by Simon R. Green.

The film got mercilessly reviewed on Best of the Worst. It was also originally going to be featured as part of the live tour of Mystery Science Theater 3000 before they realized that editing out all the scenes with nudity would leave them with a half-hour long movie and decided to riff an edited version of the sequel instead.