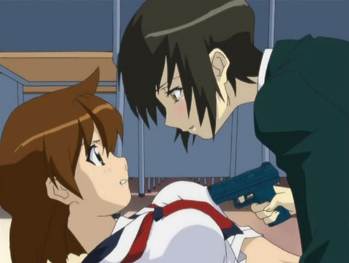 I like ya, and I want'cha. Now we can do this the easy way or we can do this the hard way. The choice is yours.
"I never liked that people took her for bisexual because she's an evil character. There are so few gay characters on TV, and we really don't need an evil one."
— Nana Visitor (on her character Kira's mirror universe counterpart), Star Trek: Deep Space Nine
Advertisement:

The Distaff Counterpart of the Depraved Homosexual and very much Exactly What It Says on the Tin: a lesbian woman who is described as mentally unstable, villainous or otherwise dangerous because she's a lesbian i.e. not a bisexual. She will often be described as covetous of other women and irrationally hateful towards the male gender, if only because they are taking away too many potential mates. Often a Child Hater too, unless All Lesbians Want Kids (uncommon for this character trope).

Very often motivated by an unrequited love for a straight woman that she wants to herself, which can result in assassinating the competition, sometimes even getting rid of her desired lover's kids. Such a character often doesn't check consent nor the feelings of the woman she's after, all that she wants is that woman to love and desire her back. The more benign versions might stop at stalking their beloved, but most examples are more a case of If I Can't Have You…. Extreme cases are downright predatory in their pursuits, but it'a rare sub-type.

This trope carries uncomfortable subtext: go straight or go crazy. Or at least have the decency of being bisexual so the male audience can have something they can enjoy watching. For years, a cocktail of censorship and bigotry rendered all lesbian characters on screen exclusively "crazy" and villainous. The Hays Code-era requirements that "deviant" characters (and that included all gay characters of any gender) must not be made sympathetic or rewarded meant that such characters would almost inevitably be toast before the final credits rolled - and this convention has persisted long after the demise of the Code itself.

All that said, lesbian characters have as much right to be as messed up as anybody else.

The Psycho Lesbian will often be a villainess for a Hide Your Lesbians couple; two women who care for each other but don't actually say it out loud. See also its Sister Trope, the Lesbian Vampire with the added benefit of being inherently evil and irredeemable.

See Depraved Homosexual for the male equivalent, or Depraved Bisexual when they're like this toward men too. See Heteronormative Crusader for when another character considers a lesbian to be psycho simply for being lesbian. See also Love Makes You Evil, Love Makes You Crazy, and Yandere for more general tropes that are closely related. See Straw Feminist if she's simply a lesbian who hates men. Contrast Double Standard: Rape, Female on Female.

open/close all folders
Anime & Manga
Comic Books
Fan Works
Films — Live-Action
Literature
Sure enough, by the end of the book, not only is it clear that there is a lot of psychological mess at the college, but it turns out that Miss Nash has committed murder for Miss Innes's sake.
Live-Action TV
Music
Theater
Video Games
Visual Novels
Web Animation
Webcomics
Web Original
"Yo gonna make me ruin da butt Chris- Imma... Imma a WA-RI-A!"