Film / The Killing of Sister George 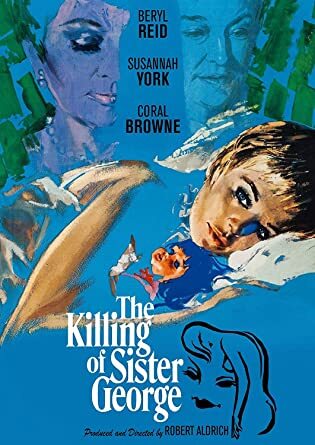 The Story Of Three Consenting Adults
In The Privacy Of Their Own Home
Advertisement:

The Killing of Sister George is a 1968 drama film based on the British play of the same name by Frank Marcus, directed by Robert Aldrich and starring Beryl Reid, Susannah York, and Coral Browne.

Actress June Buckridge (Reid) has been playing the beloved character of 'Sister George' in the hit BBC soap opera Applehurst for four years. Maybe that's too many, because she's so identifiable as the sweet district nurse that she is even addressed as 'George' backstage. However, June is in fact a rude drunken lesbian who's currently in a semi-abusive relationship with a younger woman named Alice (York), whom she nicknames 'Childie' for her childlike demeanor. Fearing that Sister George may soon get killed off for ratings, June starts acting up both on and off the set, leading network producer Mercy Croft (Browne) to try and convince her to behave—even as she becomes attracted to Alice herself.

While the stage play was a Black Comedy with only four characters and the lesbianism merely hinted at, the film is more of a dark drama presenting a rather negative—if not perverse—look at lesbianism, with a young woman being seduced by predatory older women.

The film was given an X Rating by the newly-formed MPAA film rating system, which resulted in its failure at the box officenote although it did briefly reach #1 in the US, becoming the first X-rated film to do this and selected viewing in the UK. However, Beryl Reid (who'd won a Tony Award playing June on Broadway) received a Golden Globe nomination for her performance in the film.

This film gives examples of the following tropes: