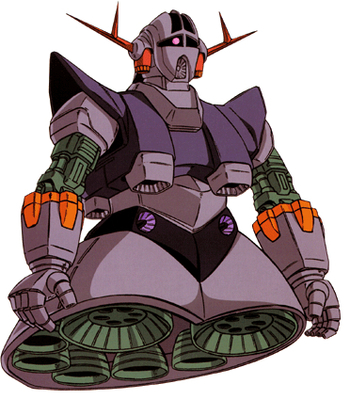 "Legs are just for show; the higher-ups don't understand that."
Most Humongous Mecha are quite similar to humans (really big metal humans that is) or the occasional supernatural being like a centaur or an animal like a lion. This is a given in many mecha genres and makes a certain amount of sense as most of the time humans or Space Elves are piloting them.
Advertisement:

These Mecha do not do that. Instead of, say, a Transforming Mecha that transforms between a humanoid and a spaceship, these vehicles sacrifice some of the human silhouette, leading to vestigial or altogether missing legs, in order to fly in space.

On the ground a hover mecha would be much like a Hover Tank, except with arms and possibly a torso, and a head. In the air they might resemble a helicopter (or a harrier jet) with arms.