Our Centaurs Are Different 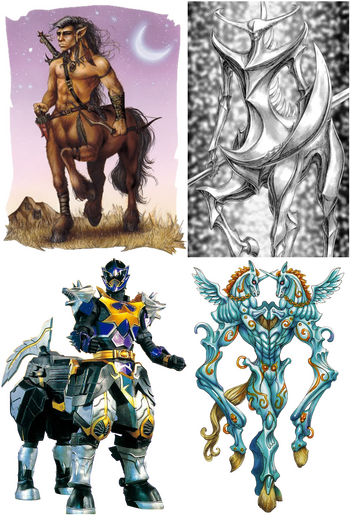 Centaurs are a specific kind of Mix-and-Match Critters originating in mythology, possessing the upper body (head, torso and arms) of a man and the lower body (everything below the waist) of a horse (though other animals are common). In the original myths they tend to be a savage and brutal species: most Greek depictions show them living only to drink, to capture women for unsavory purposes, or to attack travelers with their arrows. One possible explanation for the original myth is of a non-horse-using culture seeing horse riders for the first time and misinterpreting what they saw.

Some modern depictions will have centaurs as wise scholars; this version is inspired by the mythological centaur Chiron, who mentored several of the Greek heroes. He was very much atypical, though. note Justified to a degree: standard centaurs have the ancestors Ixion/Nephele, only Chiron has Kronos/Palmyra. The other common modern depiction is to make them into a Proud Warrior Race, which at least agrees with the myths that centaurs are violent, even if the whole "code of honor" thing seems to clash with the Classical centaurs' frequent depiction as drunken, dimwitted thugs. Regardless of type, fantasy centaurs tend to live apart from two-legged civilization, and are typically encountered out in the wilds. It's also common to depict them as skilled archers, which was a common trait in the myths as well.

Physically, a few other things can vary. For one, traditional centaurs do not bother with clothing. Also, modern depictions (possibly to make them look more distinctive) sometimes have their human parts look slightly equine, which was never mentioned in the original myths.

Centaurs are often depicted as a One-Gender Race composed entirely of males (which often explains why they sexually prey on human women) but in fact female centaurs (kentaurides) are also mentioned in some ancient Greek and Roman myths, albeit infrequently. According to Ovid they were quite comely.

A few works of fiction include winged centaurs, sometimes as the result of a cross between a centaur and a Pegasus or a Hippogriff. Other fictions include centaurs with black skin and African features, often combining them with the body of a zebra. Centaurs with the lower bodies of non-equine animals show up from time to time, with the most common variants being based on other ungulates — deer-like "cervitaurs" are particularly common — as well as large cats and sometimes draconic reptiles.

She is a gigantic mechanical centaur with a bokken.

She is a gigantic mechanical centaur with a bokken.