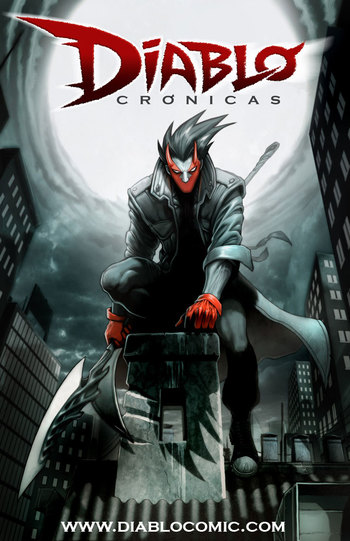 The mask isn't for hiding, it's to show you who sent me.
Advertisement:

Diablo (Devil in Spanish) is a comic book character from Chilean Media, created by Mauricio Herrera (aka El-Grimlock on DeviantArt) and Javier Ferreras (aka FERRE), made in The '90s that became a flagship for Chilean comic books that for first time started to sell good as (or even better than) US giants like DC Comics, Marvel Comics, manga, and European comic books. The comic book and its protagonist became very famous in Chile, a success only gained previously by other properties like Condorito and Mampato. Although Herrera and FERRE were the creators, in a similar way than US comic books, this character was drawn and written by diverse contemporary Chilean artists, like DREG, Miguel Higuera, Gabriel Rodriguez and Juan Vásquez, another known Mitos y Leyendas artist like Herrera. The series was released under "Visual Editores" (later "Visuales") publisher, being one of their most known titles ever.

The story is about Alex, an Unlucky Everydude who rescued his Unlucky Childhood Friend Carla at the hands of a pair of Dirty Cops who wanted to rape her. But instead that, he received a couple of bullets in his body causing him the death. Then he awake in Entropía, a Crapsack World full of monsters where the Lord of Entropía was waiting for him. He makes an offer he can't refuse: take the place of his father and come back to the human world to make suffer the human race, or burn eternally in Entropía. With no choice, Alex accepts and revives with new powers. But instead of a Face–Heel Turn, Alex converts into "Diablo", a supernatural vigilante that keeps Santiago city safe from thugs, corrupt cops, mobsters and even supernatural menaces as angels, other demons and a Witch Doctor, all watched and guided by the Hot as Hell (literally) Horny Devil called Cénit.

The publication irregularly released 12 issues between 1996 and 2001, having a Sequel Gap called Diablo: Crónicas (Diablo: Chronicles) in 2006, a black and white compilation of 3 numbers, each one with 3-4 stories drawn by diverse Mexican artists as well some Chilean ones who worked in the first Diablo series to celebrate the 10th Anniversary of the first issue and to fill some of argumentative holes of the first series. Also, the Horny Devil Cénit became an Ensemble Dark Horse and gained a couple of Spin-Off, one of them called Cénit: Trilogy, made during the first series, and the other is Cenit: La aventura tiene rostro de mujer (Cénit: The adventure has the face of a woman), a Graphic Novel released in Chile during the Turn of the Millennium. Recently Diablo reborns again with a compilation of 3 books that compile the 12 issues and a new graphic novel titled Diablo: La Resistencia in 2018.

Diablo is considered a Cult Classic between Chilean comic book fans, at the point of having his own Fan Film and a lot of Fanarts on the internet, included the artwork made by the same Mauricio Herrera. Also has a lot of fans in Mexico, where Herrera went to live and released Crónicas under Berserker Comics, his own publishing house.

If you want to know more about this Chilean vigilante, there's the official website

(offline, hosted by Wayback Machine) and the complete collection

Rereleased for Free on the internet.

Don't be confused for the name, Diablo is an Original Generation creation, see In Name Only below for more details.

My name is Alex, I was in what you could call Hell... And despite your very, I serve TO THE DEVIL HIMSELF!