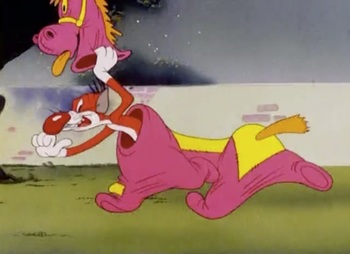 "Shhh! It's me! I'm the horse's head! Ha-cha-cha-cha!"
Nowhere did I describe it as a four-legged beast on loan from Panto-Horses-Are-Us.
— Johnny Byrne, scriptwriter for Doctor Who, "Warriors of the Deep"
Advertisement:

A traditional feature of British Pantomime occasionally also seen elsewhere, the Pantomime Animal is a non-talking animal played by a human actor wearing an animal suit. For obvious reasons this is most often seen on stage; the most common animal given this treatment in pantomime is a horse. Larger quadrupeds (such as horses) may require two actors. Children or dwarfs, on the other hand, may be needed to play smaller creatures. Though pantomime animals don't talk (at least, they're not supposed to talk), they may make appropriate animal noises on cue and often can dance as well — pantomime is a highly stylised, non-realistic theatrical form where Rule of Funny is the norm. Having a pantomime animal avoids all the hassle of working with real live animals — although sometimes real animals, usually ponies, appear briefly for the effect.

"The back legs of a pantomime horse" is sometimes used as a byword for an uncomfortable, humiliating job, especially in a show-business context. After all, the actor in that role is invisible to the audience, has to spend all their time bent over and trusting their partner to lead, and has a job which involves keeping their face adjacent to someone else's backside.

A sub-trope of Pantomime. See also People in Rubber Suits. In-Universe examples can overlap with Animal Disguise. A human version of this would be Totem Pole Trench; some inhuman versions include The Worm That Walks and Combining Mecha.

Examples of a real-in-universe creature being portrayed using this method:

Brum and the Pantomine Horse

Brum was trying to get away from the fierce opera lady, where he meets the pantomine horse.

Brum and the Pantomine Horse

Brum was trying to get away from the fierce opera lady, where he meets the pantomine horse.