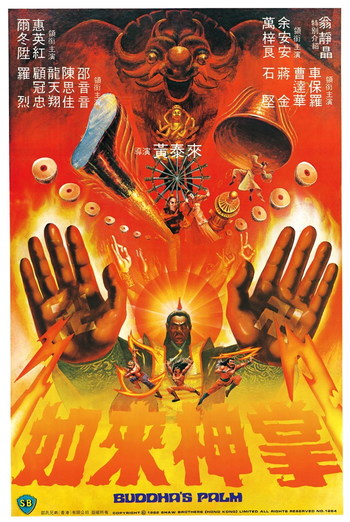 The movie is at least five times crazier than the poster.
Advertisement:

In the world of martial arts, an ancient warrior and assassin called the Flaming Cloud Devil / Firecloud Devil (Alex) was assumed to be dead after going on a rampage years ago. In the present, a young martial artist, Long Jian-fei (Derek), who was shamed after challenging his sworn rival, Ouyang Hao to a duel only to be defeated, attempts to throw himself off a cliff to his death, but was rescued by a winged Kirin, much to his annoyance (never mind that he just found out Kirins do exist...). But later he finds out the Kirin - named Da Meng - was the pet of the Flaming Cloud Devil, who now lives in an underground cavern, and decides to make Long Jian-Fei his disciple due to being the "lucky" person selected by his Kirin steed.

Schlocky and over-the-top as it is, Buddha's Palm still receives good reviews and is a box-office success that inspired the Shaws to follow-up with a series of similar, fantasy-themed period films in the early 80s, including Demon of the Lute, The Battle Wizard, Holy Flame of the Martial World and Descendant of the Sun. It was however eclipsed a year later by the Tsui Hark-directed megahit, Zu: Warriors from the Magic Mountain, which shares numerous visual elements with this movie.