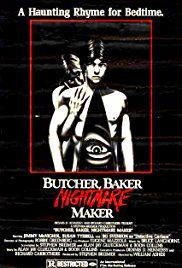 A Haunting Rhyme for Bedtime.
Advertisement:

Billy Lynch is a young man raised by his aunt. He's about to turn eighteen, and is preparing to go away for school. However, his aunt has developed a possessive obsession with the boy that soon explodes into violence. With bodies piling up, Billy is being blamed for the madness, particularly by a homophobic detective who's undergoing Sanity Slippage himself.