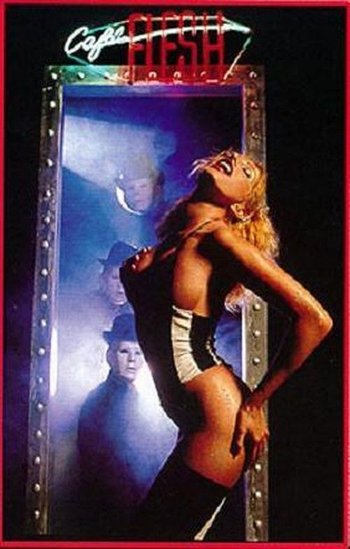 ). Sayadian was later allowed to direct, and one of his most famous efforts after Night Dreams was Café Flesh, which recaptured some of the surrealism of Night Dreams, but had a more clear story, but still retained the bizarre imagery and unusual sex scenes.

The plot of Café Flesh involves society being hit with a disease that renders most of the men and women impotent. The people that don't become sick when they try to have sex are forced to perform in live sex acts for the impotent members of society. Problems ensue when a woman who is not impotent pretends to be so, but soon has to face her fate when she accidentally lets her own sexual frustrations with her impotent boyfriend slip. This also makes the film almost visionary and Harsher in Hindsight, because later that decade AIDS became prominent. Even the nicknames of the people, the Positives and Negatives, bring up Squick connotations. Café Flesh was very ambitious in its satirical message and alienated most of its target audience who just wanted to see some explicit sex, but got some mind boggingly surreal story instead. On the other hand it did gain mainstream notability and even good reviews by major film critics, which made it prominent enough to be included in Danny Peary's third edition of his book series Cult Movies.

Comparable to Night Dreams and Sayadian's non-pornographic film, Dr. Caligari (not to be confused with The Cabinet of Dr. Caligari). Jerry Stahl also wrote for sitcoms like ALF, and scripted Bad Boys II. No, really.