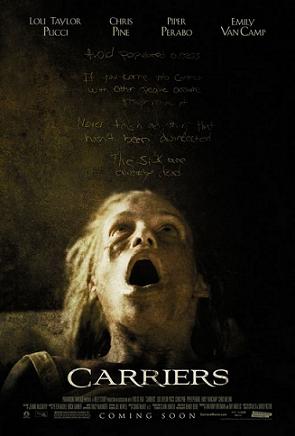 Cover your mouth when you cough, please.
Advertisement:

Carriers is a 2009 survival horror film about four people fleeing a viral epidemic in US. Two brothers, Brian and Danny, along with Brian's girlfriend Bobby and Danny's friend Kate, are heading to a place where they believe they can take shelter and wait for the viral pandemic to die out - a place called Turtle Beach, where Brian and Danny used to spend their holidays as children. Of course it all goes to hell from there.

In order to survive, the group agrees to a set of rules:

2. Sanitize anything an infected person might have touched in the past 24 hours.

3. There's nothing you can do to help the infected; they're already dead.

But then again, it's easy to come up with a set of rules; it's much harder to actually stick to them. Think of it as a road movie version of Cabin Fever played bone-chillingly straight.