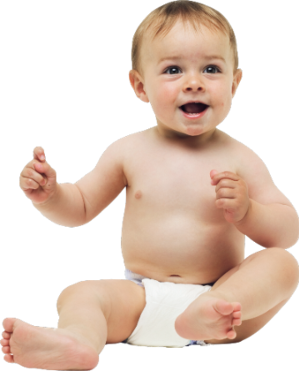 Behold! The magic wand to solve all your problems!
"Have a baby. It'll save your marriage." note Sad to get but wonderful to leave
— Terrible advice left by

Eugene Mirman on a napkin
Advertisement:

A baby can improve the situation and solve everyone's problems just by turning up. At least, according to this trope.

Babies mend broken relationships, restore someone's faith in life, and can even stop wars. Even the obligatory Screaming Birth won't put onlookers (or the mother) off pondering the magnificence of life — not even onlookers who are normally so easily squicked out that the messiness of childbirth should have rendered them comatose. All angst is dissolved with their first cry, all the problems in their parents' lives melt away with one glimpse into those Innocent Blue Eyes, the world's problems seem insignificant next to their first dirty nappy...

The positive side of this trope is that it embraces the joyful new beginning that a baby represents. Here is a brand new person, on their way to all of the wonderful experiences that come with being alive. Their chubby-faced cuteness and innocence light up the room, and even the Knight in Sour Armor cannot help but smile back when they flash their toothless grin at them. They are freshness and newness incarnate, not to mention a chance to start over, try again, and perhaps avoid some of the mistakes of the past.

The negative side of this trope is that it makes childbearing (and child-raising) look far more simple and convenient than you find it in Real Life. The inconveniences of having a baby are usually downplayed or glossed over, and even previously irresponsible parents will be instantly willing and able to step up and take responsibility for the newborn. In short, it makes a baby seem like nothing but magic and wonder, when in reality they are sleep-deprivation, a complete disruption of the normal routine, and a whole lot of work — and that's before they start walking and talking and thinking for themselves.

This trope can be Truth in Television. For some couples, a baby is indeed the answer to their problem — because their problem is that they don't have any children. For others who are struggling, their intention to have children someday forces them to work together and sort their problems out. There are also many stories of seemingly-unlikely mothers and fathers who take to parenthood like ducks to water and (even if they were shocked or dismayed to learn of the pregnancy at first) now wouldn't have it any other way. Many if not most parents take having a child to care and provide for and to provide a good example for as good reasons to lead productive and well-ordered lives, and some only get their act together once they have that reason.

However, the fact remains that Real Life babies are expensive, life-long responsibilities — the very opposite of something that will simplify your life and make fewer problems (a fact that most Deconstructions of this trope are quick to point out). Babies are not epiphany therapists and definitely not magicians. They are not the key to make a squabbling or burnt-out couple suddenly fall back in love and in perfect cooperation. In fact, having children can make some people easier to become victims of domestic abuse, as tying a man or woman to an abusive spouse through a child strips away their freedom to leave the relationship. Resentment towards an unwanted or difficult child is also a major factor in child abuse. Providing babies/toddlers with nutrition, education/stimulation, and everything else they need simply to thrive, grow, and not have major psychological issues or setbacks (much less absolute optimal levels of all of the above to make sure they have a chance at being highly educated/capable) is often beyond the financial reach of many people, and may be absolutely impossible to do well under conditions like war or famine. Then there's the problem of healthcare for both the mother if she experiences complications and/or a child with major physical or intellectual or emotional disabilities needing care for those, which becomes either impossible in less developed societies (leading to such things as Death by Childbirth and challenged children being abandoned/forced to beg or be slaves) or possible but at extreme financial and sometimes relational costs in the First World. Then there are some couples that are not equipped to have children, from anything from physical or mental reasons (and no, those mental reasons can't always be fixed via therapy) to simply having existing lives that have no room for children and no desire to quit or cut back on their career or lifestyle to be a "proper" parent.

A character impervious to the cuteness of babies is frequently a Child Hater. See also Children Raise You, where the situation is less idealistic (though with much the same outcome) and the caretaker is not the child's biological parent.

Compare The Baby Trap, which is when a character who believes in this trope attempts to invoke it without the knowledge and/or consent of their partner (or, failing that, may resort to a Fake Pregnancy in hopes of making them stick around), and Babies Ever After, where babies are used as proof of a happy ending. See Babies, Babies Everywhere for related tropes. Expect characters who believe this trope to criticize others for choosing not to have children of their own, which is Not Wanting Kids Is Weird.

Polar opposite of Children Are a Waste.