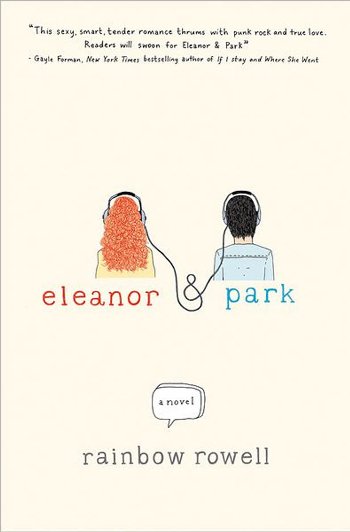 "I just can't believe that life would give us to each other," he said, "and then take it back."
"I can," she said. "Life's a bastard."
Advertisement:

Eleanor & Park is a 2013 Young Adult novel by Rainbow Rowell.

It's 1986. Eleanor is the new girl in town, returning home to her mother, stepfather, and brothers and sister after spending a year away from them. With her chaotic family life, her mismatched fashion sense, and her bright red hair, she sticks out like a sore thumb. Park is the boy at the back of the bus. Withdrawn, bookwormish, and in a stable family, he's convinced he's made himself invisible. After Eleanor ends up as Park's reluctant bus seatmate, they start out hating each other. But slowly, over mixtapes and comic books and late-night phone calls, Eleanor and Park fall in love, and have to deal with the consequences.

Notable mainly for two things: being insanely popular (it was voted 2013's best YA book on goodreads.com) and for being banned in a number of school districts thanks to the usual suspects of Moral Guardians (principally for the depiction of underaged sexual relationships).

Eleanor and Park contains examples of: