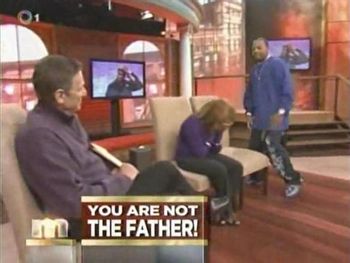 And she'll be back tomorrow to do it all over again!
"Maury, I am [insert huge number here] percent sure that he is the father of my baby!"
— Almost every mother seeking paternity on the show from a deadbeat dad
Advertisement:

The show first aired in 1991 and was produced by Paramount Domestic Television in national syndication. In 1998, the show began exploring "trash" topics like cheating spouses and DNA tests. Not coincidentally, around this time, he had defected from Paramount to what is currently NBCUniversal Television, who also produced and distributed fellow trash TV survivor Jerry Springer.

The most common element used in the show is DNA tests, sometimes taken to the extreme if a single man is accused of making multiple kids from different women, or when a single woman brings multiple men on the show (sometimes over the span of several episodes) to find her baby's father. The men always say, "That baby don't look nothing like me!"

Many episodes also feature rowdy, out of control teen girls who disrespect and abuse their mothers and/or siblings (they always say "You don't know me!" when confronted about said wild behavior); lie detector tests; men who treat their women like slaves; and crazy footage caught on tape (cheaters caught in the act, insane accidents, etc.). While not shown very often, there have been many episodes of mothers with extremely obese toddlers and young kids (usually ranging from ages 3-7) and their mothers who always are either clueless as to why their child keeps getting fatter; who know they're giving their kids too much junk, but don't know what to do; or ones that firmly believe making their child dangerously fat makes their kid special and beautiful. There have also been episodes about guests trying to overcome their phobias, missing children, and "Maury's Talented Kids", where really cute kids sing, dance, etc., sometimes for cash prizes or family vacations.

Around certain holidays, such as Valentine's Day or Christmas, the show will celebrate those holidays by having either a group of people dressed as women (but some are men or vice versa, so the guests have to figure out who is who) or have Jack Hanna bring in a bunch of exotic animals to entertain the children in the audience.

In March 2022, NBCUniversal announced that show was being cancelled after 31 years, Povich intends to retire after the show finishes production. The show will go into reruns beginning in September.

You can also play the drinking game (at your own risk).

You ARE the father, and a user of these tropes:

Until next time, America.