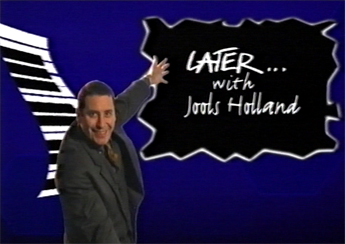 "It's Tuesday. We are live as we speak here at Television Centre. I have one of the towering giants of British music next to me; you may indeed recognise him. I think it's going to suggest to you the sort of evening we've got in store..."
—Jools Holland with Suggs, 2009
Advertisement:

Featuring an array of performers from all over the world and representing an eclectic range of genres, this long-running BBC series is one of the last great music showcases on British television. Originating in 1992 as a spin-off from the earlier nineties evening arts programme The Late Show, Later... has long since outlasted its parent show and made its presenter, former Squeeze keyboard player Jools Holland, the face of British music TV (a role to which he first aspired on Channel 4's 80s series The Tube).

Initially recorded on a Tuesday and broadcast on Friday the same week, 2008 saw the introduction of Later... Live, a half-hour version of the programme broadcast live on Tuesday nights, followed up by the full-length pre-recorded edition on Friday. Aside from the substantial range of artists and styles covered in the programme's 18 years, Later is noted for several unique features: