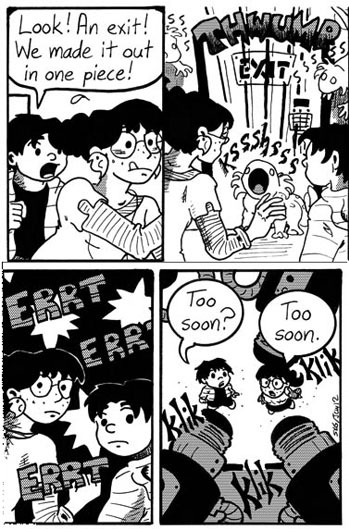 The party of heroes just defeated the Big Bad. He's finally dead. Hurray! Now we can all go back and live peacefully.... BUT WAIT! During that final encounter with the villain, they completely forgot to deactivate the self-destruct mechanism he activated. It's not that they couldn't, but they just were a little pre-occupied with a certain antagonist.

Well, for whatever reason may be, the heroes have survived, but now have somehow been separated during the quest. Friends, Family, or just people that are happy to see each other. When they finally meet back up, they take a moment to celebrate their reunion, but it must be cut short. They are quickly reminded that they have no time to spare and must continue on with their goal.

This trope is used to describe a situation that arises when a character or group of characters accomplish something worth celebrating over, but the moment is cut short when someone or something, usually the Only Sane Man, reminds them that they're not out of the woods just yet... Or they just simply forget. This is very much Truth in Television in athletic contests - sometimes someone showboats a bit too soon and winds up blowing their chance at victory because of it.

This is mostly a comedy trope, though sometimes played seriously. Sometimes a disaster could be averted if someone had just remembered it.

Compare Out of the Frying Pan and Hope Spot. See also Your Princess Is in Another Castle!, for times when it's the audience who realizes that it isn't quite over yet.