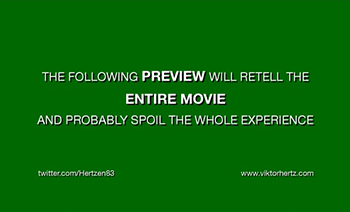 They also show you the best lines.
"Oh, yeah, I'm sure he's really gone. That's why the advertisements show him in about TWENTY more scenes that he wasn't in yet."
— The Nostalgia Critic's review of Pearl Harbor
Advertisement:

Movie trailers are known to mislead, but sometimes they go in the opposite direction, giving away key plot points and twists (and sometimes what would have been a twist ending).

Of course, some of this depends on your definition of "Spoiler". Given that a trailer consists mostly of clips from the movie itself, a fair bit of spoilerage, in this case footage from a later part in the movie, is often inevitable.

There is also the matter of context. An action movie, for example, may preview a random fight scene between two characters, but when you actually see the movie itself and realize that the other dude the hero was fighting happened to be his best friend in the beginning (which may or may not have also been part of that trailer), you realize in retrospect that the trailer's fight scene was actually a foreshadowing or Chekhov's Gun about the betrayal that occurs later.

When a certain event is a foregone conclusion, like with The Film of the Book or films Based on a True Story, it's again debatable that it's really a spoiler. So if you read the examples below from a movie you haven't seen (either you have no intention of seeing it, or maybe you should reconsider continuing past this part), and find yourself thinking "I didn't even know that was a spoiler", don't worry about it.

It should also be noted that in many cases, commercials released after a film's first week or so will contain a lot more spoilers than those leading up to the premiere.

A related phenomenon can occur with DVD menu intro screens, which often include clips or montages of footage from the movie/episodes, thus potentially revealing them to the viewer out of context, before they have a chance to actually start playing the film proper. Often these will give away major plot points before the viewer has a chance to even start the film. These can be even more effective at spoiling the film's plot than trailers, since a viewer might plausibly be expected to go days between seeing a trailer and finally seeing the related movie, which might give them a chance to forget things from the trailer. With menu intro screens, on the other hand, the viewer is being shown clips from something that they are moments away from watching.

Also related are the trailers which run immediately previous to the show you have already sat down to watch. Known as a Precap and often starting with "Next, on X:", these segments spoil you on things you would just know in the next 30-60 minutes on a show you have already decided to watch. These are intended to pull in the new viewer, but can seem unfair to those already into a show as you are most likely to be already watching at the beginning of the episode.

In comic books, solicitations of future issues can spoil not only the current story line but future ones as well. It's easy for readers to deduce which characters that will live or die, new characters that will be introduced, and major events that will happen simply by looking at covers and descriptions for issues a couple month down the line. A common way publishers get around this is to have the solicitations be as vague as possible and have advertised covers be incomplete, edited to remove potential spoilers, or be a variant to the main cover. However, it's not uncommon for publishers to purposely leak major plot points of their big event comics in order to generate interest for the book.

Fanfic summaries can be especially bad about this. In fanfiction writing, it's conventional to warn the reader beforehand about any plot points they might potentially dislike — such as specific romantic pairings, a major character death, or a tragic ending. This, however, can easily kill off the tension if these are meant to be a surprise. This is however justified by the intense Flame War the writer most probably wants to avoid, and to not have to deal with some vitriolic Ship-to-Ship Combat in the feedback. Also, many fanfic readers prefer to know what they're getting into so as to be able to steer clear of stories featuring a rival pairing.

This trope can lead to Trailer Joke Decay.