Spoiled by the Merchandise 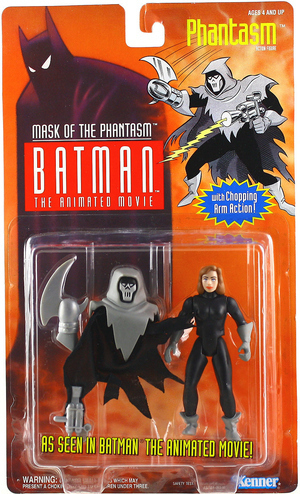 So much for the Phantasm's Secret Identity.
Advertisement:

When toys or other derivatives of a merchandise-driven franchise spoil upcoming episodes or storylines.

In a Merchandise-Driven franchise, sometimes the marketing department releases toys, soundtracks, or other merchandise related to a key plot element long before the relevant episodes have first been aired or the relevant stories have been published. It is worth noting that, just as Tropes Are Tools, spoilers in merchandise aren't necessarily bad; The Merch is often considered a form of advertising for the show, so merchandise that hints at future episodes helps get more eyes watching the show, which in turn lets the broadcaster charge more for ads that get aired during the show.

Compare Late-Arrival Spoiler, which is when the merchandise spoils previous events in the main work, and Early-Bird Cameo, which is for characters that first appear outside of the main work. A Canon Foreigner that becomes a Canon Immigrant is typically an Early-Bird Cameo and not this, but may become this if Word of God suggests the marketing division introduced the character through the merchandise too early...though beware of Trolling Creators in this case. This might be caused by a Delayed Release Tie-In if a work's release is pushed back. For when a piece of merchandise reflects a plot point that was ultimately removed from the work, see Early Draft Tie-In.

It should go without saying that Spoilers follow. You Have Been Warned.