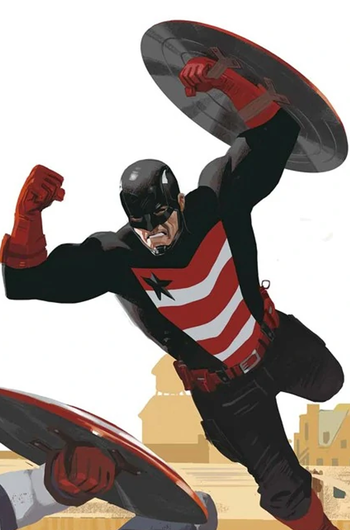 Created as a villainous foil for Captain America, John Walker embodied American patriotism in opposition to Steve Rogers. Whereas Rogers was an idealistic, liberal-leaning, lower-class urban Northerner, Walker was a more pragmatic, conservative, middle-class rural Southerner, presented as the jingoistic Captain Patriotic crusader that Rogers was often misunderstood as being.

When Rogers relinquished the title of Captain America, Walker was tapped by the US government to replace him, beating out Nick Fury, who was deemed too old, and Sam Wilson, as the US government thought Americans wouldn't accept a black Captain America. During his time in the role, Walker grew more heroic than originally established, and later adopted the new title of US Agent when Rogers reassumed his old name.

US Agent will make his live-action debut in the Marvel Cinematic Universe series The Falcon and the Winter Soldier, portrayed there by Wyatt Russell. note His father, Kurt, previously appeared in Guardians of the Galaxy Vol. 2 as Ego.

US Agent has appeared in: