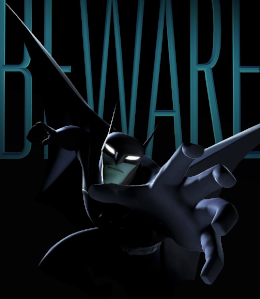 "To those who would hurt the innocent, I give you this one warning: Beware my wrath."
— Batman
Advertisement:

A CGI animated Batman cartoon in which the Caped Crusader teams up with swordswoman Katana and his gun-toting ex-secret agent butler Alfred Pennyworth to face a criminal underworld populated by costumed supervillains.

The show premiered on July 13th, 2013 on Cartoon Network as a part of their DC Nation block.

Unfortunately, the series was the latest victim of Cartoon Network's ongoing Network Decay and was downright abused by the network. The show was abruptly pulled from the schedule after only eleven episodes with no notice or announcement from Cartoon Network. The show's cast assured that the show had simply been delayed until January 2014, then delayed again once January actually rolled around. It was not mentioned by Cartoon Network for their 2014 slate. However, new episodes past this initial run on Cartoon Network aired in New Zealand on NZTV.

Toonami began running episodes starting on May 20th, 2014 with the production crew intent on airing all 26 episodes

. In September, Cartoon Network explicitly forbade Toonami from ever airing the show again, forcing Toonami to air the final 7 episodes in a marathon on September 28th- the last day before CN's order went into effect. Cartoon Network then wrote off the show from their network, deeming it a financial failure and ending the series for good. Of the Batman animated series, Beware has the shortest run with only one season of 26 episodes.

As of May 2020, the whole series can be streamed on HBO Max.

Beware the Batman provides examples of: