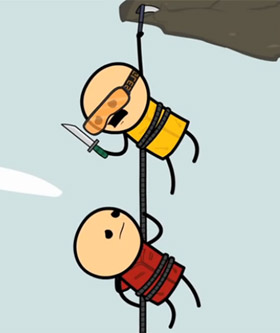 Jack and Jill went up a cliff
but Jacko was a dope.
He dropped a peg and broke his leg.
To save herself, Jill cut the rope.
—The Illustrated Guide to Law
Advertisement:

Alice is dangling over a drop large enough to be certain death. The only thing holding her up is Bob, who she's attached to by the safety rope. Despite his assurances that he'll save her, she knows that the weight of the two of them is too much; she's as good as dead and if she doesn't do something, Bob will die too.

So ignoring his words, she takes out her knife, says a final goodbye and cuts her safety rope.

A common version of this is to have the characters holding hands, so that the faller must simply relax their hand to sacrifice themselves. If a character does fall in such a manner and doesn't appear onscreen as dead, they probably aren't, except in a Dwindling Party situation.

Although the safety rope version is the most common, this trope covers any situation where someone is in such deadly danger that their death is all but assured and any rescue attempt would more than likely result in more death, making the mercy killing of the victim the pragmatic solution. A More Hero Than Thou dispute may have preceded it, or the victim acted quickly to pre-empt the question.

Usually it's the victim who makes a Heroic Sacrifice by deliberately condemning themselves to save others from death or prevent them from attempting a risky rescue attempt. The would-be rescuers are likely to feel a great deal of angst and guilt even if they did everything they could to save them.

The alternative is that it is the potential rescuer who condemns the victim to their fate. While potentially just as pragmatic as if the victim made the call, this will usually paint the character in a very negative light, more so if they actively cause the victim's death; less so if they do so at the victim's request.

See also Cold Equation, I Will Only Slow You Down.