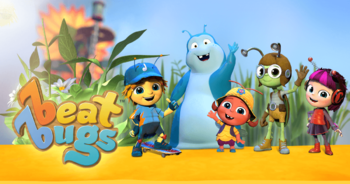 All you need is love.note Left to Right: Jay, Walter, Buzz, Crick, and Kumi.
Beat Bugs is a 2016 CGI animated series. Created by Josh Wakely for Netflix, the series features insects that sing songs by The Beatles. The entire world (an untamed backyard garden) is built around the lyrics to the numerous songs used and mentioned throughout the series. Wakely took years getting the rights to the music and the staff around him to create the show. The show aims to teach young children life lessons in a gentle manner while using the music of The Beatles.
Advertisement:

The series currently has three seasons, the third having premiered in November 2018. Netflix also released

a 48-minute special, Beat Bugs: All Together Now on November 21, 2017, featuring "Here Comes the Sun," and also including the songs "I Want to Hold Your Hand," "All Together Now" and "Ticket to Ride." A stage show based on the program, Beat Bugs: A Musical Adventure, began playing in theaters in October 2018. A film, Beat Bugs: The Movie, is currently in development. It's unknown if the show will be renewed for a fourth season.

The success of the series led to another program, on Netflix, Motown Magic, by the same creator. While not set in the same universe, it features a similar concept, in that each installment is themed around a particular song, in this case, Motown music.

All You Need Is Love

The theme of "Beat Bugs," an animated children's series that bases its stories around Beatles songs, is "All You Need Is Love" from the Beatles, performed by the cast.

All You Need Is Love

The theme of "Beat Bugs," an animated children's series that bases its stories around Beatles songs, is "All You Need Is Love" from the Beatles, performed by the cast.