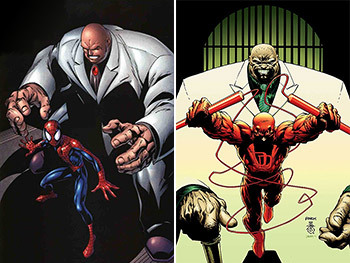 Green Arrow: I can't believe your advice worked. We actually managed to turn Ra's al Ghul into an Arrow villain.
Daredevil: Hey, it's like I said. We turned Kingpin from a Spider-Man villain into a Daredevil villain in the seventies and I never looked back.
— I'm a Marvel... and I'm a DC, "Hi, I'm a Marvel...and I'm a DC...and I'm on TV

Also known as The Supervillain Shuffle

. The occurrence wherein a villain, originally introduced as an enemy for a specific hero, subtly through time or Continuity Creep, deliberately or unintentionally, becomes more identified with another hero.

While any Shared Universe may depict a hero fighting another's antagonist, usually they remain identified with the original. For instance, Superman may occasionally fight The Joker, and Batman may take on Lex Luthor from time to time, but no one would ever claim that either bad guy is anything but the other hero's Arch-Enemy. This trope refers specifically to characters that have reached the narrative point where the villain is now more identified in the popular consciousness as being an adversary to a character he did not originally fight.

There are various reasons why this occurs. Reasons include: