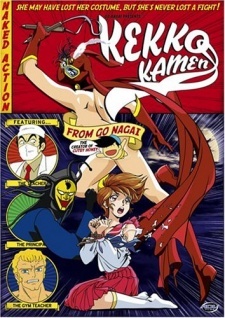 This is probably the safest image we could find.
Advertisement:

Kekko Kamen is a manga series written and illustrated by Go Nagai. It was originally published on Shonen Jump from 1974 to 1978.

No-one has seen her face, everyone has seen her body. Kekko Kamen is a superheroine who apparently refuses to wear the skin-tight bodystocking so it was removed from her uniform. She fights injustice, mostly focusing on rescuing students from insane disciplinarians.

Compare and contrast Maboroshi Panty, another manga illustrated by Go Nagai and serialized in Shonen Jump, which had a heroine who helped her father fight crime by wearing only gloves, boots, a scarf and two pairs of panties (one worn over her face like a mask) and featured Kekko Kamen's nemesis Satan's Toenail in the third volume.