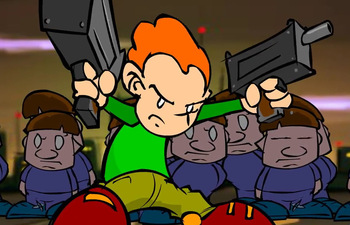 Pico's taking over.
Pico is a Web Animation-slash-Web Games series started by Newgrounds creator Tom Fulp. The series revolves around the characters Pico, Nene and Darnell as they get involved in particularly violent situations. The characters first appeared on the site in 1999 with several short games and movies:
Advertisement:

As the series got more popular, it eventually became the work of people all over Newgrounds, with more flashes being added by various Newgrounders. Over the years, Pico became the Series Mascot of Newgrounds alongside other famous characters such as Alien Hominid, The Clock Crew, and the Tankmen, and even gained an Evil Counterpart Spin-Off series in the form of Piconjo (an extremly pale Pico with a BFS and a dong the size of a tree, resulting in 99% of his apparitions culminating in a penis joke or something related), described by Newgrounds itself as the Wario to Pico's Mario. Pico was also used in the ratings bar for much of the site's early years until he was eventually replaced by a Tankman.

Pico, Piconjo, and Pico's best friends Darnell (a black Pyromaniac and Mad Bomber kid) and Nene (a suicidal Asian girl with quite an addiction to blades and a comical tendency to catch herpes due to her loose morals, who is often portrayed as Pico's Love Interest) are only the main characters of the whole Picoverse. However, Tom Fulp doesn't make Pico shorts as often anymore. A sequel called Pico 2 was infamously in Development Hell for years, with only some level designs appearing to the public. The status of this game has been unknown for years, although it seems that Tom doesn't like answering questions about it. The unfinished demo of the game was made available for Newgrounds Supporters on Pico Day 2014. The gameplay footage can be viewed here

In late 2020, Pico was added as an opponent (and potential future playable character) in Friday Night Funkin', prompting a new round of interest in Pico and his previous games. Here, he's portrayed as a mercenary hired by Daddy Dearest to kill the Boyfriend, who he has a personal history with. Tropes related to that version of Pico can be found on the game's Characters page.

In 2006, a Newgrounds user suggested an idea for a "Pico Day", based off the Clock Days that had started earlier. Every year on April 30th (Tom Fulp's birthday) the Portal is filled with submissions based after the Pico characters, which makes up the majority of Pico works today.

Pico movies and games can be viewed here

. You can read more about him on the Newgrounds

or on the Pico Wiki here