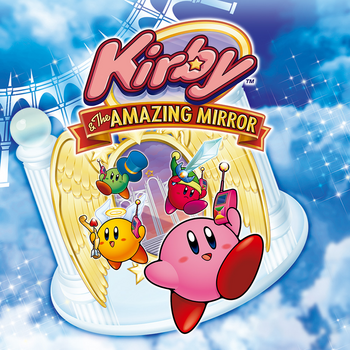 One for all and all four Kirby!
Advertisement:

Kirby & The Amazing Mirror (known in Japanese as Hoshi no Kirby: Kagami no Daimeikyū, or "Kirby of the Stars: The Great Labyrinth of the Mirror") is the eighth main series Kirby game, and the second to be made for the Game Boy Advance, released in 2004. The game was published by Nintendo and developed by HAL Laboratory with assistance from Capcom, Akira, Dimps, and Flagship. The title is most notable for the shift from Kirby's typical style of a straightforward Platform Game to a nonlinear Metroidvania with optional cooperative multiplayer. It is notably the first Kirby game to be made following the 2003 departure of series creator Masahiro Sakurai from HAL; Sakurai would act as an advisor to the game's developers as his final piece of involvement with the series.

The story begins with Meta Knight discovering that the Mirror World, which floats in the sky over Dream Land, had been invaded by a sinister presence. The mirrors of this country have the mysterious power to make any wishes reflected in them come true, so realizing that this means the mirrors could only reflect bad things, Meta Knight flies off to save it. Meanwhile on the ground, Kirby is unexpectedly slashed by a shadowy-looking Meta Knight, splitting him into four different-colored Kirbys. The four Kirbys then board a Warp Star and chase their attacker into the Mirror World.

The game is essentially what you get if you throw the Metroidvania genre in a blender with The Legend of Zelda: Four Swords and the Kirby franchise. The player must traverse a maze of nine interconnected areas, finding the maps for each, pressing buttons to connect them to the Hub Level, and defeating their bosses to collect the eight Mirror Shards to restore the Dimension Mirror, the path to the Final Boss. While you're doing that, the other three Kirbys are off on their adventures too, and you can call them by cell phone at any time to help you fight enemies or solve puzzles which need an extra Kirby or two; the game also has a multiplayer mode which is pretty much the same thing except other players fill the roles of the other Kirbys.

Kirby & The Amazing Mirror is one of the ten Game Boy Advance games to be available to participants in the Nintendo 3DS Ambassador Program, released exclusively to early 3DS adopters for free on the eShop in December 2011. In April 2014, the game was brought to the Wii U Virtual Console. Like all GBA Virtual Console games, the multiplayer mode is inaccessible in these releases.

A successor for the Nintendo DS (called Kirby: Squeak Squad) was released two years later (minus the Metroidvania gameplay), which uses a few of the same mechanics such as treasure chests, vitality hearts, and spray paint cans.