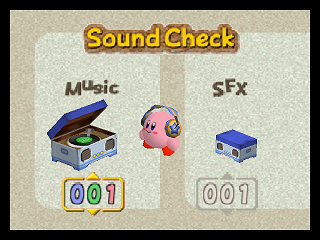 Today's menu of Awesome Music.
An option in a video game where you can listen to all music from the game. May be available from the beginning, but often is an unlockable.
Advertisement:

Sometimes it allows you to hear the entirety of a song that is longer than any scene it's used in. If you're really lucky, it may just include the option to hear every audio sample from the game; not just music. So that may include SFX and voice work.

Originally it had a proper purpose. Arcade games would have a mode where a service technician could bring up a testing page to check for faults on a given board. This often included a sound test (both music and effects) as a way to check that the sound hardware was operating properly. (See also Debug Mode.) Why this was included in home console games (often with no arcade counterpart) was probably for the player's benefit. That's where the "test" of the name comes from, but nowadays, players usually use it to enjoy their favorite tracks without the distraction of actually playing the game.

A number of old DOS games also had this, in the setup program or in the game itself. It does seem to have gone out of fashion since the 16-bit days, possibly due to rise in popularity of the soundtrack CD market.

Touhou 5's extensive Sound Test, with all the songs and commentary from Touhou 5...as well as all of the other PC-98 games, including some unused tracks.

Touhou 5's extensive Sound Test, with all the songs and commentary from Touhou 5...as well as all of the other PC-98 games, including some unused tracks.