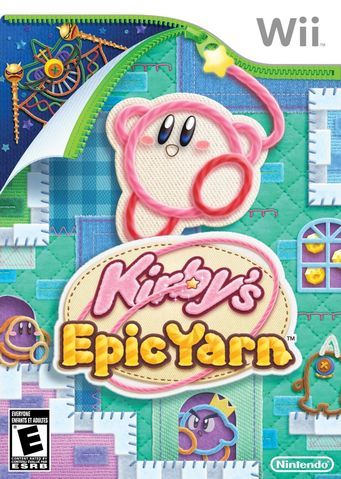 It's Kirby. He's yarn. And it's epic!
"This grass feels funny," Kirby thought. "It feels like... pants."
Advertisement:

Kirby's Epic Yarn (known in Japanese as Keito no Kirby, or "Kirby of Yarn") is an entry in the Kirby series, released on October 2010 for the Nintendo Wii. Bearing much in common with a Kirby's Adventure commercial

from almost two decades ago, the game's overall design is vastly different from Kirby's other appearances. The animation style is meant to look like everything is a yarn outline with minor details such as facial features. The layout of the worlds and levels is scrapbook-like, with simple pieces of fabric such as cloth and felt. Many of the enemies are also made up of cloth, felt, and pipe cleaners.

Another key feature in the game is that Kirby has lost the ability to inhale, as the air goes right through his new body. Instead, Kirby can create a whip-like object using yarn that he uses to wrap around enemies. The enemy will turn into a ball of yarn which Kirby can carry and throw at other enemies to defeat them or grab items. Kirby can also use this ability to pull down scenery such as walls to progress or scrunch up the scenery to make gaps shorter so that he can jump across them (as he can no longer puff up and float). Finally, Kirby also gains the ability to shapeshift into numerous forms such as a car, a weight, among others.

The story kicks off when Kirby, out on a stroll, tries to chow down on a tomato. This turns out to be the head gear of Big Bad Yin-Yarn, who sucks Kirby into Patch Land. There, Kirby meets Prince Fluff, who explains that Patch Land has been broken into pieces and that the world has to be sewn back together. The two decide to work together to restore Patch Land and stop Yin-Yarn.