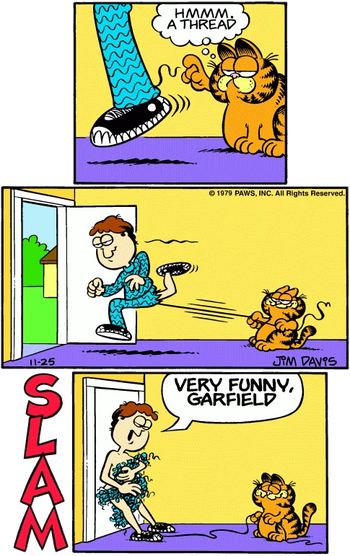 "If you want to destroy my sweater
Hold this thread as I walk away
Watch me unravel, I'll soon be naked
Lying on the floor (lying on the floor)
I've come undone."
— Weezer, "Undone (The Sweater Song)"
Advertisement:

It's a law of cartoon physics (occasionally crossing over into live-action) that anything made of cloth can unravel into a single thread as though it were knitted like a sweater. Obviously more realistic (if you care about that kind of thing) when it involves an actual sweater, but even then unraveling a sweater typically isn't as easy as pulling on a random loose thread.

A variation of this trope concerns undoing a mummy's wrapping this way, usually causing the mummy to spin. Of course, this has the same problem in that a mummy isn't covered by one single long wrapping any more than a shirt is made of one single thread.

In especially cartoonish examples, this also applies to an animal's fur or feathers.

Related to Clothing Damage and The Nudifier. Compare Stripping Snag when a piece of clothing gets stuck somewhere and is subsequently ripped off. Only metaphorically related to Pull the Thread. Occasionally combined with Giving Them the Strip.