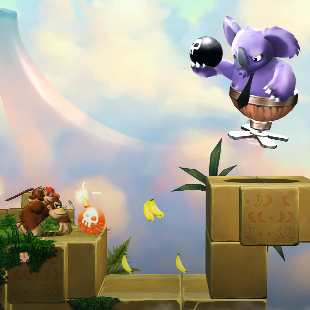 Flying enemies are a long-time staple in videogames, and several distinct subtypes and trends occur within this group. While they often simply fly along present paths or swoop down at players from on high, many instead opt to stay well above the player and drop objects down on their heads.

A Bombardier Mook's payloads can vary considerably in nature and how they affect play, although simple damaging projectiles are the most common type. Explosive ammunition is fairly common, and it's also far from unheard of for these guys to toss smaller Mooks down to the ground, in which case this may overlap with Drone Deployer.

Bombardier Mooks are often much trickier to deal with than regular flying Airborne Mooks. Most flying enemies need to come in contact with the player to damage them, which means they must periodically enter their melee range and thus make themselves vulnerable to attack as well. Bombardier Mooks do not have this weakness, and can spend their time circling well above the player's range, dropping their projectiles and safe from retribution. Some may be completely invulnerable in this manner, but it's more common for players to have one or two specialized tools, such as special powers or a long-range attack, that may let them bring Bombardier Mooks down to more manageable heights. Another common weakness is that these guys rarely have any significant physical attacks of their own, and may become entirely helpless once in close range.

Another limitation of Bombardier Mooks is that they're typically limited to attacking targets directly beneath them — they don't usually have much horizontal range, and need to either position themselves to be above the player before attacking or wait for them to pass beneath their position. This gives players a degree of freedom in dodging their attacks. To make up for this, a Bombardier Mook's projectiles may be more powerful than standard attacks, may deal Splash Damage of some kind, or may be found in large concentrations that will force players to constantly keep moving to avoid the dropping payloads.

Subtrope of Airborne Mook. See also Death from Above. For cases where a Bombardier Mook is deadly from overhead but helpless at close range, see Crippling Overspecialization.