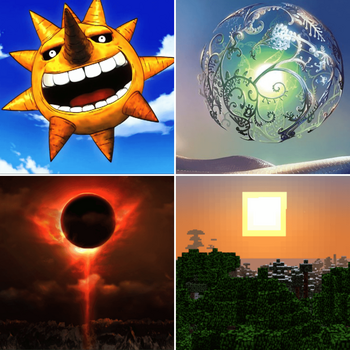 The sun is a mass of incandescent gasnote actually a miasma of incandescent plasma. Or possibly a chariot wheel, a very large flashlight, or a two-dimensional painting on the cosmic backdrop that is the sky. Forget everything you know about Mr. Sunnote And in several languages — and in J. R. R. Tolkien's Middle-earth — it's Ms. Sun, thank you very much. because, in Fiction Land, it's all wrong.

Unlike Weird Moon, the occurrence of these is rarer, except in animations where they're more common.

Related to Weird Moon. A subtrope of Artistic License – Space, and a supertrope of The Face of the Sun.