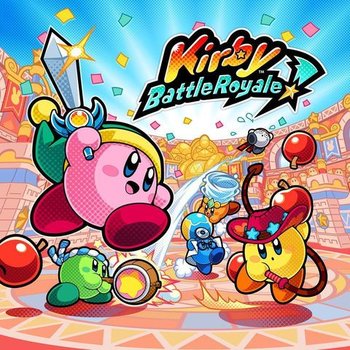 Kirby has met his toughest rival yet... himself!
Advertisement:

Kirby Battle Royale is a standalone Party Game spinoff of everyone's favorite pink puffball for the Nintendo 3DS. It's not based off of any sub-game from the other 3DS titles and is strictly its own thing, although it shares a lot of similarities to Kirby Fighters Deluxe where Kirby in multiple power-ups (and Bandanna Waddle Dee, Meta Knight and Dedede) battle against each other - but now it plays in 3D like Kirby's Blowout Blast. It also features multiplayer co-op and online play.

The premise is King Dedede hosting a tournament in a special colosseum built to his own likeness, a battle among various forms of Kirby, where only one Kirby will stand victorious, featuring 10 battle modes, each with their solo and team versions. Kirby and Bandanna Waddle Dee partake in it to get the prize, a giant cake provided by the King. Meta Knight, meanwhile, is also in the game for his own reasons. In Story Mode, Kirby and Bandana Waddle Dee have to go through "leagues", from Beginners all the way to Platinum; to advance to a higher league, they need to fill a completion gauge - which are filled by partaking in matches - and then win the qualifier match.

The battle modes are: