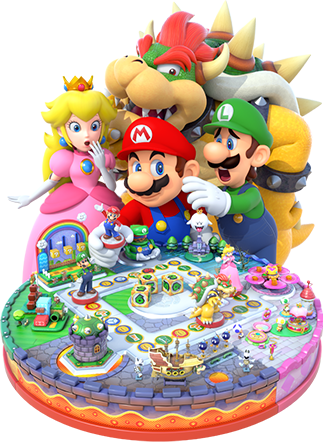 "Mario, you can't let Bowser play with us!"
"Why not? He went go-karting with us last week."
"I've always questioned Mario's definition of party. Apparently in the Mushroom Kingdom a 'party' is defined as a random string of tasks through which one risks their life for coins, then spends said coins on stars so that they may be declared the 'winner'."
— Nerd Rage, [1]

A genre of game that took off with the release of Mario Party on the Nintendo 64. A party game is a minigame collection where two to four players compete against each other in a boardgame-like environment. This is not a rigid rule though; Party Games can have board gameplay, but no minigames, and vice-versa (see Minigame Game for more examples of the latter).

Because those games encourage fun over competition, rarely do they require much skill to play, with luck and chance being common factors that influence gameplay in order to ensure a feeling of fairness for everybody involved. Expect gratuitous use of Comeback Mechanics.

The term is also used more loosely to describe games that are really fun to have at a party. This label doesn't have a strict definition, but multiplayer (obviously) and accessibility are two important criteria. Things like Rock Band and Mario Kart fall under this category.

Either way, these are far more common on consoles than on PCs because during the SDTV era, few PCs were equipped to use four controllers and a large monitor.