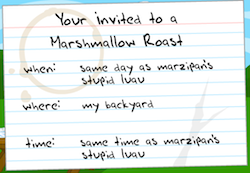 Doesn't even try to hide it.
Advertisement:

Somebody, usually our Cool Loser heroine, is throwing a party. Perhaps it's her first "grown-up party", maybe it's a fairly major birthday, like her sweet 16th or her "now you're a teen!" 13th. However, someone else (usually the Alpha Bitch) has found out about this and scheduled a bigger, better and unsupervised party on the same day and time as the Cool Loser's party.

Of course, everyone at school goes to the Alpha Bitch's party, tempted by expensive freebies or a famous band she's somehow managed to wrangle, leaving our heroine and her few closest, strongest friends sitting alone with her parents, surrounded by unused party stuff and miserable.

However, something happens at the Alpha Bitch's party; perhaps the party-goers don't actually have fun, maybe the police show up and close it down for being too noisy, or her parents close it down and ground her for trashing their house. Everyone heads over to the Cool Loser's house, and end up having a much more fun party.

The trope doesn't always follow this format; variations do show up — maybe it is the Cool Loser who schedules a party against the Alpha Bitch's when the Cool Loser isn't invited, for example. It also isn't an exclusively teen trope; versions with adults have been seen, but it shows up a lot in shows aimed at tweens that feature teens.

This trope seems to plague female characters slightly more than males, but not enough to label it as Always Female. See also Start My Own.

This isn't exclusive to partying; whether deliberate or not, any event scheduled to occur at the exact same time as a similar event qualifies as this type of gambit.