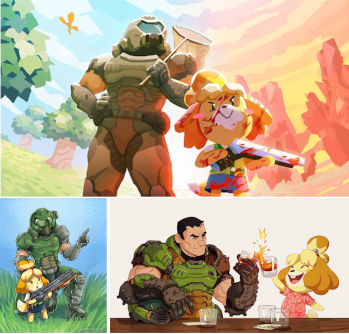 When cute and cuddly meets dangerous and deadly, the result is a surprisingly good time.note Top: Art

. Images used with permission.
"Many of these hobbies intersect in one way or another at a [convention] like this, and usually some common ground in the Venn diagram of geekiness is found before long."
— Clint Basinger
Advertisement:

The opposite of Fandom Rivalry. Two (or more) fandoms have a lot of overlap because of shared talent (sometimes the result of a Production Posse), because of similar subject matter, because they happened to air at about the same time, or for no real reason at all - they just like each other. Often people get into one fandom and are encouraged by this relationship to get into the other.