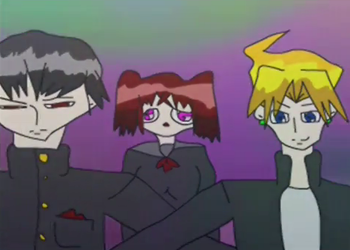 L to R: Yukari, Tsuki, and Chitose
Long ago in ancient times, there were cool forces that raged explosive ninja battles for the throne. But there was one group that decided to rise up, and enter victory for which the other groups could not partake! It was a beautiful display of power and beauty and strength. However, another group decided to stand up to this apocalyptic world with elegant samurai! And thus, today's world was born. But that isn't what this story is about. This story is about a girl in modern-day Tokyo night.
— Opening Narration from the first episode
Advertisement:

Tsuki Desu is a YouTube and Nico Nico hosted Fanime series by Anthony W.H., started in the Spring of 2012. Najika Tsuki attends the night school Sugoi Gakuen Academy School in modern-day Tokyo, living a seemingly normal life (albeit with no friends). She pines after Student Council President, Yukari Bueno, spends her free time with cats, and laments that she definitely has no friends. But that all changes when New Transfer Student Chitose Miyamoto shows up one day, and he seems to want to be Najika's friend....!

This is the second series released by master fanime creator Anthony, who already released a fanime of similar QUALITY, known as Quest Of Laizen.

Current episodes you can watch on the creator's channel

, or on English Nico Nico

Tropes that ''Tsuki Desu" provides an example of: