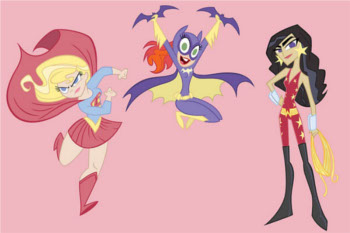 Five episodes were made and aired throughout 2012, with these minute-long shorts including:

Lauren Faust would go on to pitch the idea of expanding the shorts into a full-length series, but was turned down. Years later, Faust was able to recycle many of the concepts seen in SBFF when she became showrunner for the television series DC Super Hero Girls, based on the media franchise of the same name.

These shorts have a jet-load of tropes!: