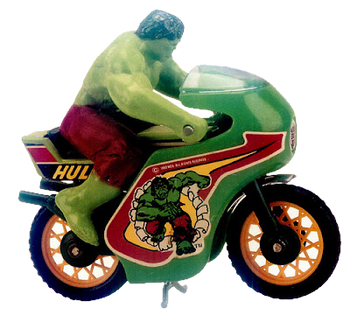 Look, if it bugs you, then you tell him he can't have a Hulk-cycle!
"I want a car! Chicks dig the car!"
— Robin, Batman & Robin
Advertisement:

Sometimes, a character's theme goes beyond wearing his underwear on the outside. These are vehicles that follow a costumed character's theme; they may resemble the costume, or extend the idea behind the character. Regardless, these conveyances are recognizably a part of the individual's leitmotif (not to mention the show's merchandising campaign).

This trope doesn't necessarily include ''iconic'' vehicles. While the X-Men's Blackbird is identifiable by fans, it doesn't continue their visual theme, and it wouldn't be recognized by someone who wasn't familiar with it. A good determiner is to ask yourself, "If I saw this for the first time on the street, how likely would I be to identify it as belonging to <character>?"

If the vehicle stands out from being at least some decades old in the setting, it is the Hero's Classic Car. Ordinary vehicles (and even race vehicles) with cartoon characters slapped on their bodies have their own variant, Itasha.

Most of the time a Cool Car; if the character isn't supposed to be particularly enthusiastic about cars, or fabulously wealthy, or have specialized transportation needs it counts as an Improbably Cool Car. For a specific type of Thememobile, see Faceship. Not to be confused with the Pope Mobile, although it is an example of this trope. May overlap with Signature Team Transport, Absurdly Long Limousine or (if there are no performance upgrades at all) Rice Burner.

Most of the toyetic live-action 1960s Trope Makers were customized by George Barris, the only leading Southern California-based customizer/showrod builder willing to work to Hollywood's hurry-up-and-wait production schedule more than once.

For the grammatical construction associated with this, see Hyperaffixation.

Due to The Problem with Pen Island, this trope can either be pronounced "theme-mobile" or "the me-mobile." Make of that what you will.