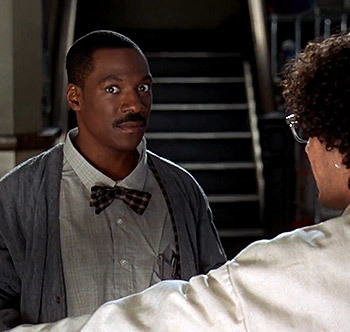 Someone call a mason.
We seem to be missing a fourth wall.
"What do yooooooou think, fourth wall?"
— RiffTrax, Troll 2
Advertisement:

A form of Breaking the Fourth Wall, an Aside Glance occurs when an actor gives a brief, silent glance to the camera as a way of acknowledging that their current situation, or the person they're speaking to, is awesome, stupid, weird, or otherwise unusual. Alternatively, it is also utilized as a form of Medium Awareness that the characters know they're in a show.

It's generally used as a way to acknowledge the audience's assumed reaction and show that the glancing character is just as smart as them and just as aware of the absurdity of the situation. Importantly, the glancer should never speak to the audience, nor should the other characters (if it is fiction) acknowledge that the person just glanced away.

The glance can be either a normal look or an Eye Take.

The trope has its roots in the "aside", a trope in European dramatic tradition that had characters making one-line comments to one another which are unheard by the other characters. Originally this was used to undercut dramatic tension but was turned around over time to allow for serious usage, in plays such as Hamlet. Characters also began to make remarks to the audience or to themselves rather than to other characters, akin to thought balloons in comics. This was modified into the silent glance, which was used in stage comedy routines and subsequently found its way into the films of Laurel and Hardy and other movie comedians, thus making it Older Than Television at least. The speaking version still exists, too, in various contexts, including comics; see Aside Comment. Compare Batty Lip Burbling, Fourth Wall Psych, and Meaningful Look.

Used a lot in This Is Reality situations. Compare Spiking the Camera when this is done accidentally.

While his girlfriend gives him a "The Reason You Suck" Speech, Fritz rolls his eyes, gives an Aside Glance, and makes a "talking too much" gesture with a smirk.

While his girlfriend gives him a "The Reason You Suck" Speech, Fritz rolls his eyes, gives an Aside Glance, and makes a "talking too much" gesture with a smirk.