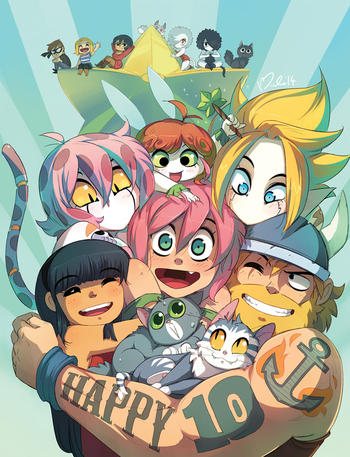 is a French webcomic running since 2004. Though created and written by comic artist Souillon, he almost never breaks character; every blog post, comment response, or FAQ answer is written as Maliki.

The comic centers around Maliki, a pink-haired, pointy-eared comic artist, and the many funny, relevant or random events going on in her life. While it is mostly a Slice of Life comic in nature, it also features several supernatural elements, the most notable one being the existence of "mnesic cristallisations", metaphysical projections materialized by strong emotions.

Many characters also appear in Maliki's adventures, among which are her friend and work partner Becky, her cristallisation LadyBird, the young Chinese clandestine Fang, and the gruff and beefy viking Jonn the Norman. Maliki also owns many, many pets, the ones most often seen being her cats Fëanor and Fleya, later joined by Arya and Luma, then by numerous others.

Maliki quickly gained in popularity since its creation, and is nowadays one of the most popular and well-known French webcomics. It is also often quoted as a prominent example of "franga", aka "French manga", due to its heavily-inspired art style and publication format.

Starting in 2007, the comic has been published in physical form, courtesy of Ankama Éditions, in a series currently comprised of seven volumes. Two separate self-published volumes, entitled Maliki Blog, were successfully crowdfunded and released in 2016 and 2018 respectively. Three novels also exist, telling the story of Maliki as a junior higher.

While originally written in French, most strips are also available in English

, and a select few are also available in Spanish

, derived from a few strips

posted during the webcomic's Hostile Show Takeover, and featuring the titular violent, amoral, and adorable Mascotte. It follows a three-panel format, and features plenty of gore and dark humor.