Webcomic / The Mansion of E 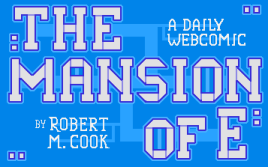 The Mansion of E

is a daily fantasy webcomic created by Robert Cook, AKA Troper Geoduck. The eponymous structure is a large cactus-shaped edifice mysteriously perched on the side of a high cliff overlooking a Specific Ocean, surrounded by a ruin-strewn forest. Underneath is the "Basement", a collection of caverns and tunnels and such, going deep into the earth. The strip painstakingly details the activities of the Mansion/Forest/Basement's many and diverse inhabitants; including a few Humans, who technically own the entire place. The plot is set in motion by the sudden arrival on the scene of the wandering heroine Rosemary Ripley, who sets off a long series of events disrupting the established order.

The strip is currently hosted on ComicFury (after a long stint on the now mostly defunct Comic Genesis.) There's also a fan-run wiki

and a fan-made backup and mega-summary

On hiatus since November 2021.