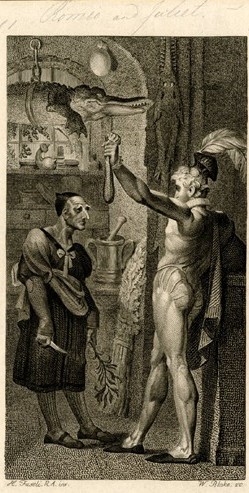 Romeo supporting his local apothecary - note the alligator in the upper left.
There was a large crystal ball with a crack in it, an astrolabe with several bits missing, a rather scuffed octogram on the floor, and a stuffed alligator hanging from the ceiling. A stuffed alligator is absolutely standard equipment in any properly-run magical establishment. This one looked as though it hadn't enjoyed it much.
— Mort
Advertisement:

The workshop of a wizard, alchemist, or apothecary is never complete without a stuffed crocodile or alligator hanging from the ceiling. What it's actually for is anybody's guess.

Somewhat Truth in Television, as historically animal skeletons, fossils, and taxidermy pieces were exhibited by medieval apothecaries and astrologers as a show of wealth and worldliness. The curiosities brought in both gawkers and customers, and served as a form of advertisement; after all, anyone making enough money to purchase exotic specimens for display must be doing good business. This trend would eventually evolve into early museums in the form of personal "cabinets of curiosities" — see this picture

◊ from 1599. Historians suspect the alligator in particular might have turned into the most prevalent example simply due to its durability: with their thick hairless hides and squat, compact bodies, preserved alligators are less prone to damage over centuries than more delicate specimens, meaning that more of them have survived to give the impression that every apothecary had one.