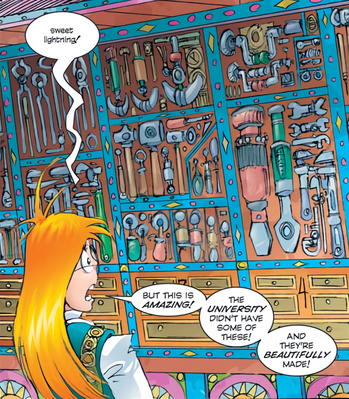 "I love tools. I have money now so I can buy things I don't need. I have a gear puller... I have no idea what this is, looks GREAT on the pegboard though."
— Tim Allen
Advertisement:

In many exotic locations such as the Bazaar of the Bizarre, the Black Market, the Mad Scientist Laboratory, the Wizard's Cave, Darkest Africa, or The Future, there will be a lot of odd bits of mysterious... stuff... lying about. What is it? What does it do? Why is it there?

Well, chances are it isn't anything. While some of it may be a genuine bit of Applied Phlebotinum put there as Foreshadowing, much of the time it's just Cow Tools: props or artwork that the designer of the scene threw in to add to the color or atmosphere of the place. This doesn't stop the fans from wildly speculating about them, though.

The Other Wiki refers to these details-for-details'-sake objects as "greebles."

Named for a notorious The Far Side cartoon,

showing a bipedal cow standing at a bench on which are laid out a set of primitive-looking and only vaguely recognisable implements, captioned simply "Cow tools". Creator Gary Larson, in a compilation book with a section dedicated to the screw-ups and controversial cartoons from his career, said it was the one cartoon he'd gotten the most enquiries about — as people tried in vain to figure out what the hell they were for. (One letter wrote "What is the meaning of Cow Tools? What is the meaning of life?") In fact, Larson hadn't meant them to be anything, except strange. He got the idea from an anthropology class regarding animals using tools, and just wondered what it would be like if cows had tools.note (He believes his biggest mistake was thinking this was funny, which it was for different reasons than what he intended — and he regretted making one of the objects look vaguely like a saw, thus implying the rest had real-world counterparts. On the other hand, the fact that there is No Such Thing as Bad Publicity no doubt attracted more readers to the strip and boosted Larson's circulation. Go figure.)

One thing about Cow Tools is that they can be useful for hiding a clever Chekhov's Gun among them. Everything else has no purpose in the story, except for that one thing...

Cow Tools are similar to Noodle Implements in that they both invite speculation; the difference is that the former are inherently obscure and/or peculiar, whereas the latter are ordinary in and of themselves but have a mysterious and unexplained connection to some event.

Compare Narrative Filigree, which is the non-visual equivalent. For the trope about creatures literally using tools to demonstrate their intelligence, see Tools of Sapience.