Film / The Shape of Things to Come 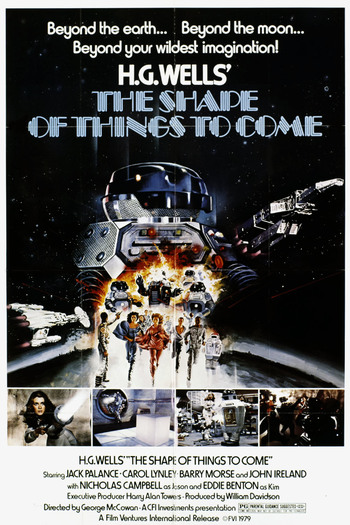 With the earth rendered all but uninhabitable due to the "Robot Wars" and resultant plague, humankind has colonized the moon with a tres-'70s discotastic society. Enter Omus (Jack Palance), who has overthrown an outlying drug-mining colony and who wants to be installed as president and dictator-for-life of the human race; to this end, he crashes a robot-piloted ore ship into the moon colony, warning that drug shipments (apparently necessary for human survival, due to The Plague) will cease if he is not appeased.

There are only three people who seem to think that standing up to Omus is a good idea: John Caball (Barry Morse), an old colleague of the villain; his son Jason (Nicholas Campbell); and Jason's girlfriend Kim (Eddie Benton), the daughter of a senator. Adding to the mix is the robot pilot, whom Kim repaired and reprogrammed after the crash so as to become an ally — and gaining the ability to teleport in the process. These four brave souls steal an experimental starship (which looks suspiciously like the USS Enterprise after being hit with a steamroller) and set out on a series of mini-adventures to stop the Evil Omus once and for all.

It exists to capitalize on a certain low-budget sci-fi flick released two years earlier. Needless to say, it didn't work out very well, although it has developed something of a cult following.

RiffTrax released a Video On Demand riff of this film in January 2020. On November 25, 2021, it was revealed that this movie would be one of the thirteen to be used as part of the thirteenth season of the cult-classic series Mystery Science Theater 3000. Its recap page can be found here.